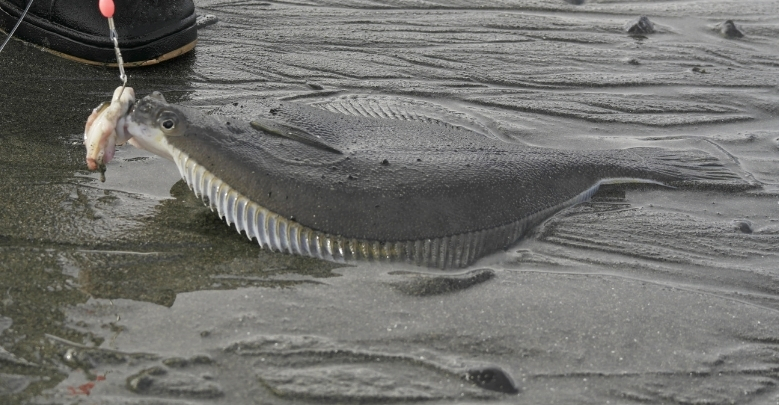 Flatfish species of all sorts can be found all along the Eastern Seaboard from New England to Florida and into the Gulf, then up through California along the Pacific coast. Among flatfish, flounder fishing and fluke fishing is arguably the most popular fishing among saltwater fishermen, especially in the inland waterways. While flounder aren’t known for their fighting ability or performing any spectacular blitzes, they are known to many as the best-tasting catch in the sea. But don’t be fooled—flounder aren’t flat, helpless fish; most have sharp, needle-like teeth built for aggression. If surf fishing for flounder sounds enticing to you too, then jetties and piers are great places to begin.

If you’re surf fishing in the colder Atlantic waters of New England, you’re likely to encounter the winter flounder. These smaller flounder have toothless mouths that they use to suck worms out of the sand and mud. Their diet mostly consists of worms, clams, sand eels, and mussels. Bloodworms are the ticket to catching winter flounder. Worms make a great bait for these flatfish because they are the natural forage and stay on your hook better than shellfish.

When fishing in warmer waters, you’re most likely to catch the aggressive southern and summer flounder, also called fluke. These are a much more predatory fish than their toothless relatives. Fluke will feed on just about any fish or piece of fish they can fit in their mouth, including mullet, spot, perch, silversides, and mud minnows. Squid, shrimp, and crabs are a staple of their diet as well. Squid is often the most popular and universal bait because of their abundance and ability to be rigged attractively. In summary, use bloodworms for winter flounder and squid for fluke.

It’s safe to say that jigs are the ultimate artificial bait to use for flounder since they’re weighted and can easily stay on the bottom. A white curly-tail grub like that found in our surf fishing kit is an excellent attraction for flounder. You can put the white grub on a jig, or you can put it on a bare hook of your top-bottom rig for added attraction. We highly recommend adding a piece of natural bait to your jig and soft plastic if it’s available. Squid works great for this. When using a jig for flounder, make sure that it’s on the bottom after the cast. Then simply reel it in slowly while bouncing up and down off the bottom. This will create a more life-like action, enticing the flounder to bite.

When rigging your bait for flounder, the most popular rig is a top-bottom rig. We highly recommend using a top-bottom or pompano rig with #4 wide-gap hooks like those found in our surf fishing kit. This style of hook is excellent for “sandwiching” multiple baits on a single hook. Wide gap is by far the most popular style of hook for flounder fishing. To prepare your squid for flounder cut it into the shape of a long, thin triangle about 1-inch wide and at least 4-inches long.  This extra length makes it flutter in the current as you reel in your bait, which is highly attractive to flounder. However, downsize an inch or so when fluke fishing. This applies to using baitfish too. Instead of cutting the fish into chunks, fillet the fish and slice it into strips. Keep in mind that flounder love fresh bait. If your fish or squid starts to look soggy and discolored over time, remove it and replace it with a fresh piece. 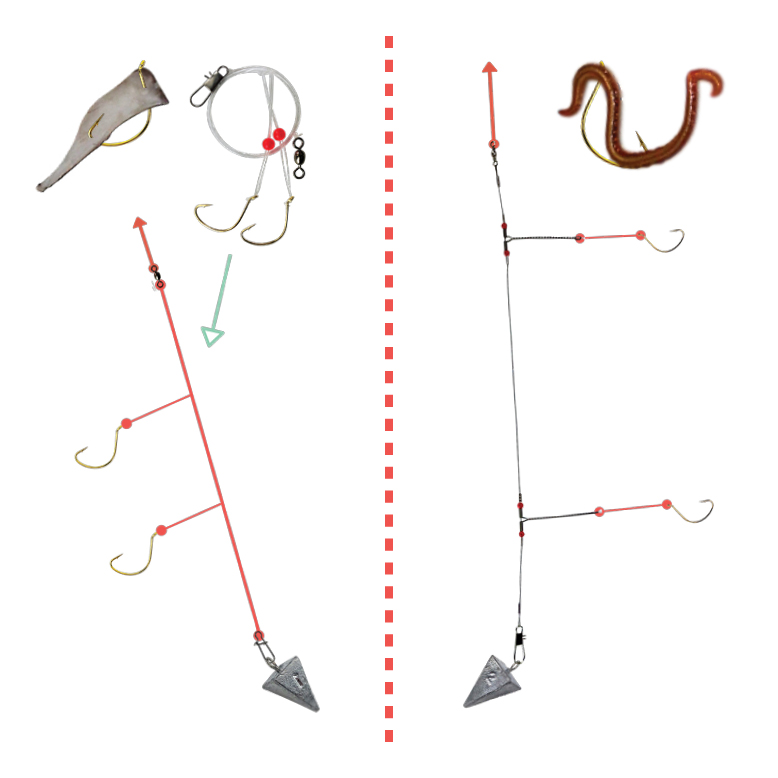 Jetties are a great structure to fish around in the surf even among many of the other prominent surf structures. When the tide moves and creates current, the jetty acts as a barrier and abruptly alters the direction of the current. This offers fish of all kinds the opportunity to wait in calmer water and watch for food drifting by in the current, kind of like a conveyor belt. Not all jetties are equal however—some jetties attract more fish than others.

Larger jetties not only can have more influence on the current, but can also act as a home for crabs, small baitfish, eels, certain mollusks like mussels, and aquatic plant life. These jetties are often made of large rocks or concrete, and are always partly submerged even during low tide. These make great jetties to try first. Flounder can be on any side of these jetties waiting for food throughout the tide cycle. If you’re on the jetty itself, focus on fishing where the waves are breaking and creating turbulence. During the summer, flounder love waiting in the white wash created by the waves. During the winter, try fluke fishing close to the rocks. If you’re standing at the edge of the surf, for example, they are sometimes only a surf rod length away.

If you’re faced with a series of multiple smaller to medium-sized jetties, it’s common for the most productive jetty to change from day to day. Since these jetties do not take long to fish around, moving from one jetty to the next is a good strategy. You want to find the ones that are attracting the fish. If flounder are present, it shouldn’t take very long for them to let you know. Once you cover the majority of fishable area, move on to the next jetty and continue the cycle. 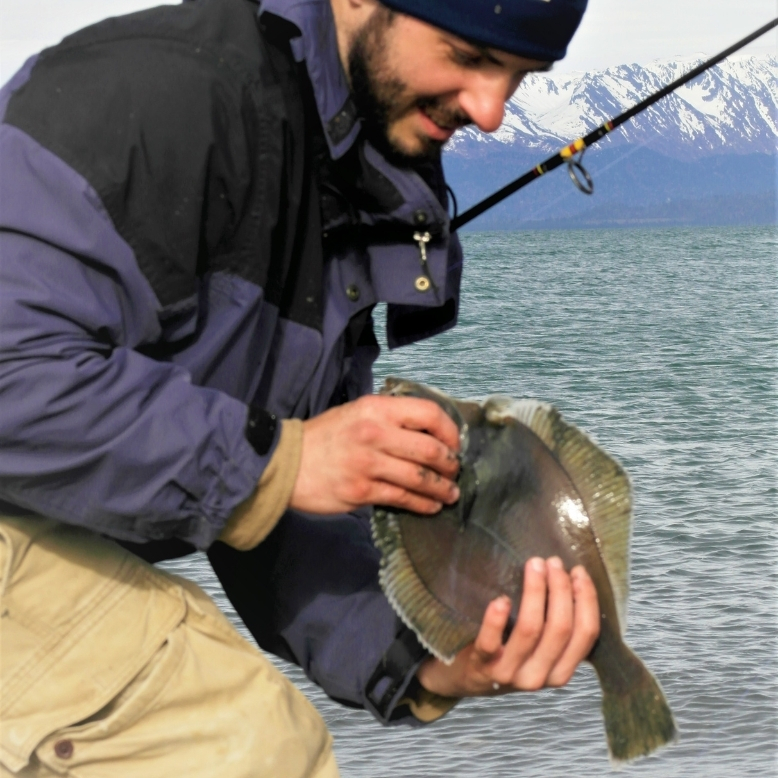 Flounder Fishing from a Pier

The main benefit of fishing from a pier off the surf is the ability to fish a good distance from the shore. However, piers are able to attract their fair share of not only fish, but fishermen as well. You’ll probably notice a lot of pier fishermen with their rod resting on the pier rail near the end of the pier. When fishing for flounder from a pier, you’ll have more success if you do the opposite. Hold the rod so you can cast the bait and reel in slowly where the waves are breaking closer to shore. Start by casting straight out behind the furthest wave from shore, and continue working your way closer to shore on each cast. After you’ve worked both sides, start fishing around the pier pilings right beneath the rail. Don’t cast, just drop the bait straight down. If there are no fishermen present around you, you can walk along the pier and bounce your rig along the bottom as you walk.

How to be Successful Fishing for Flounder

To be a successful flounder angler, it’s important to know that they rely heavily on camouflaging to ambush their prey. They depend on the current to bring food to them while they stealthily blend in with the bottom. This means that, first, you must have know when there is current. Check your local tide chart for the moving tides, which is the best time to fish for flounder. Second, don’t let your rod sit in a rod holder. You will have much more success if you hold the rod and bring the bait to them. This requires you to cast your bait and reel it in slowly along the bottom. When a flounder bites, they usually make one lunge at the bait to grab it and bring it back to the bottom. This is what creates the distinct bite that flounder fishermen are all too familiar with: a tap of the rod and then dead weight. It feels as if your bait and rig just got a lot heavier. Once you feel the weight—don’t set the hook! We recommend counting to 8 seconds to let the flounder situate the bait in its mouth before setting the hook. 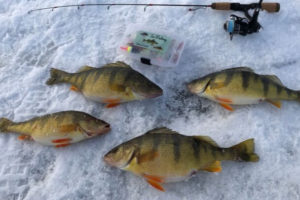 5 Ice Fishing for Perch Tips to Fill a Bucket

Ice fishing for Perch gets anglers excited! When you find[...] 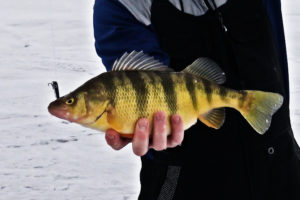 Our first full length episode for the Tailored Tackle Youtube[...] 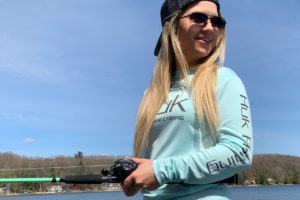 How to Use a Baitcaster: Baitcasting Reel 101

A baitcaster reel can take your fishing game to the next[...]