Ice Fishing for Pike: How to Target Northern Pike Through the Ice

Ice Fishing for Pike: How to Target Northern Pike Through the Ice

Pike are a popular ice fishing target for anglers of all skills due to their aggressive feeding habits, large sizes, and abundance. The two most common species of pike are northern pike and chain pickerel. Chain pickerel is most common along the eastern states while northern pike is more common across the midwest. Chain pickerel average around 2-5 pounds while northern pike tend to grow larger at 3-7 pounds. Both species respond to the same tactics, however it is important to size your bait and tackle according to the target population in your particular water body. Let’s take a look at some tried and true tips to ice fish for pike of all sizes across the ice belt.

Tip Up Fishing for Pike

When tip-up fishing for pike, there are several things you can do to ensure success. The main thing is to spread out and cover a lot of water. As much of an area that you can manage with 5 tip-ups will drastically increase your odds of catching fish. The next best thing to do is to place your tip ups in locations that are likely to hold pike. Weed lines and large clumps of vegetation are key hang outs for pike. Healthy vegetation holds bait fish which lure in pike. Target the edges of weed lines, around denser areas, as well as transitions from weeds to deeper bottoms. Shorelines that sport a change in depth, as well as the edges of shallow flats are great places to zero in on. Once you find your spot, the last thing to do is to place each tip up at a different depth. Pike and pickerel are most often found in 3-15 ft where vegetation still gets light. Space your tip ups out across a transition in depth to cover 5, 10 and 15 ft depths. The main takeaway is to spread out and cover various depths across areas that hold vegetation.

Once you find your spot, the next step is to gather your tip up rigs and bait for pike fishing. Learning to rig a quick strike rig is beneficial as it is one of the tried and true set ups for tip up fishing. The hook up ratio on pike with this rig is way better than a single treble hook set up. Using two trebles on heavy line, you hook one near the tail of the bait fish and the second treble just inside the dorsal fin. The second treble is attached up the line (3-4 inches) and connected with a crimp or snap. This method allows you to set the hook as soon as you get to the hole. Once you get a good hook set, retrieve the line hand over hand. The quick strike rig should be used on larger sizes of bait like 4-6″ shiners, sucker minnows or shad.

One of the most productive ice fishing techniques is dead sticking for pike. To dead stick, rig up your ice fishing combo with a live bait jig and a large shiner or sucker minnow. Suspend the lure a few feet to halfway up the water column. Let the bait sit perfectly still by placing your rod on a bucket or in a rod holder. Within close proximity to your dead stick, jig a a second combo with a flashy lure like the Rattle Rip lure or the Jigging Lure in our ice fishing kit to call in roaming pike to your live bait. Jig rapidly and cover large portions of the water column, as your primary goal is to call pike into your live bait offering. When pike sneak in, they usually prefer to eat the dead stick bait. You will have little luck jigging for panfish or other small species as a roaming pike will spook them off. So only set up a dead stick with a large minnow if you are targeting predator species.

Why NOT to Jig for Pike

When targeting pike and chain pickerel through the ice, it is a good idea to focus on tip-ups and dead sticking. Jigging is helpful for calling in pike, but the live minnow sitting in place is the key offering. Pike usually roam alone or in small pods of 2 or 3 fish. There will generally be a single or small pod of pike for every 20-30 yards. Jigging to find pike simply won’t get as many bites as spreading out and letting pike roam to you. Focus on covering productive water and spreading your gear out. Work the area with tip-ups or lock into a key spot with a dead stick rig. Jigging is a good way to pass time while fishing for pike, but work through flashy and other attractive baits to draw in curious fish. Most of your bites will come from the tip-up or dead stick with a live bait fish.

Justin is an avid angler and content creation specialist with a major passion for the outdoors. He helps to create content for Tailored Tackle including photos, video, and fishing related articles. His career is in Civil Engineering and he graduated from Vermont Technical College in 2013. Justin is often found on both sides of a camera and enjoys hunting, golf, camping, and making maple syrup. He lives in northern Vermont with his girlfriend Amanda, stepson Charlie and dog Hank, not far from Lake Champlain. 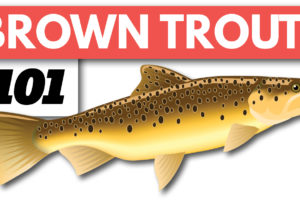 Brown trout are one of the most popular trout species[...]

Shark Fishing on the Beach for 3 to 5 Footers

Compared to all the species that fishermen target, it’s safe[...]

Jeff @ HatCamBass does a really great job explaining the[...]